We all know Ljubljana best for its appearance. But even in the interiors of buildings, there are spaces that take your breath away with their artistic perfection and luxury. We looked for some such interiors and photographed them. The list is not final and we suggest you complete it by posting your suggestions in the comments on social networks. 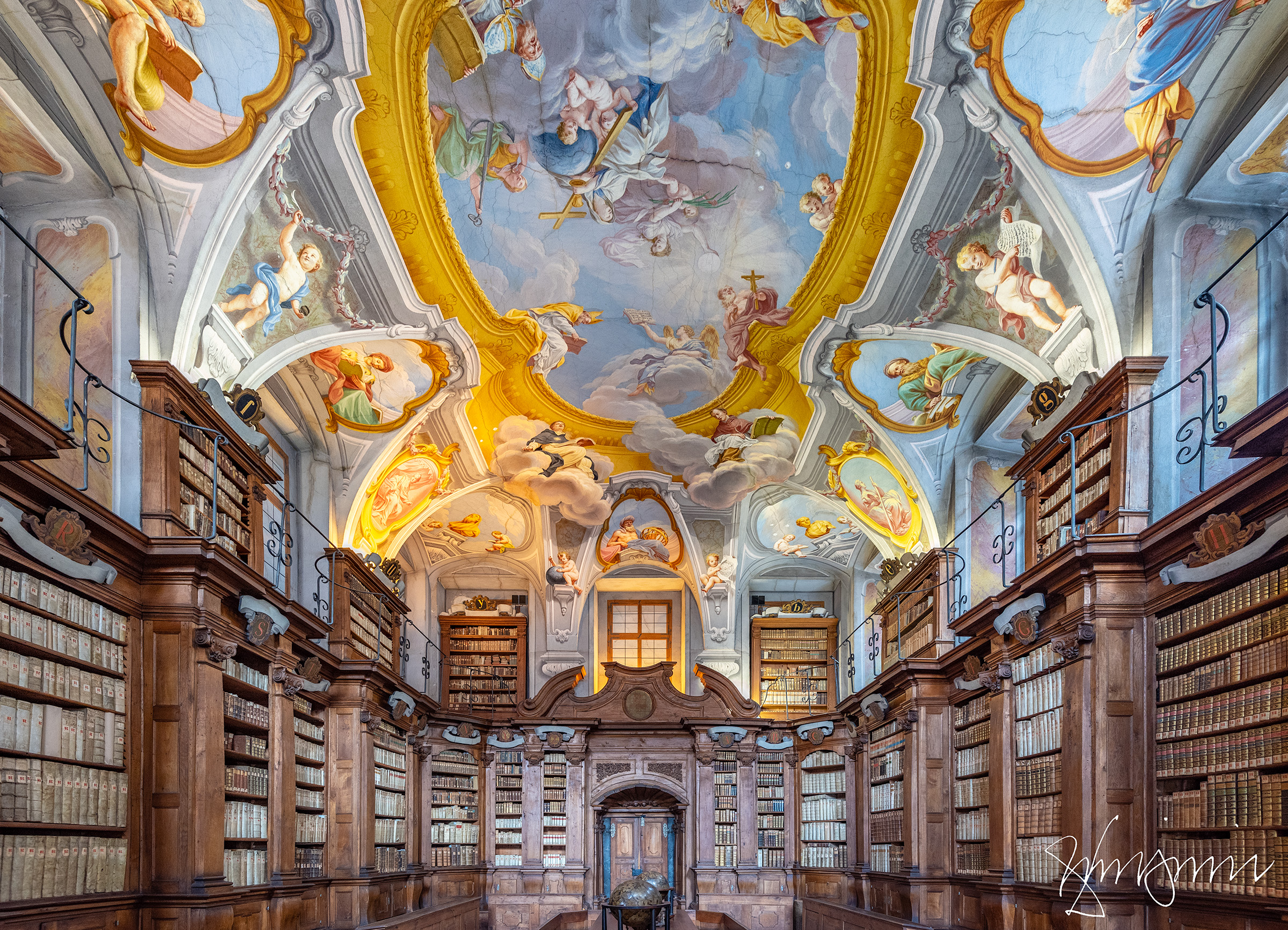 This Baroque masterpiece, which construction began in 1701, is housed in the Theological Seminary building. The combination of richly articulated, massive cabinets and ceiling frescoes with characteristic allegorical paintings looks magnificently. The author of the paintings is Giulio Qualio, and the wooden work by Jožef Bergant.

The National Gallery of Slovenia 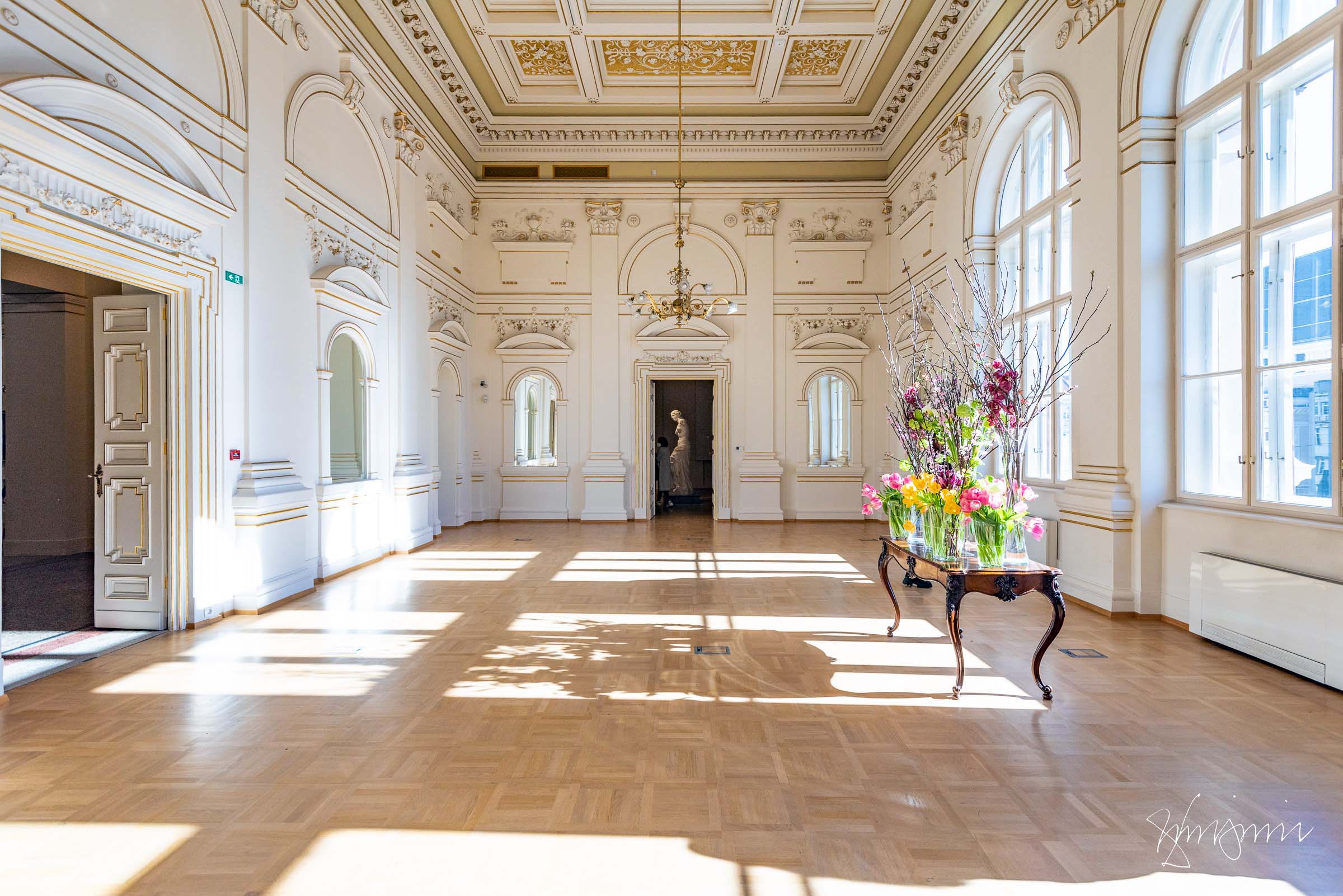 The Neo-Renaissance building, which exhibits Slovenian art from the Middle Ages to the 20th century, is a work of art in itself. It was built in 1896 and is the work of the Czech architect František Edmund Skabrout. It impresses with its elegance and purity of lines, symmetries and white-gold colour combination. 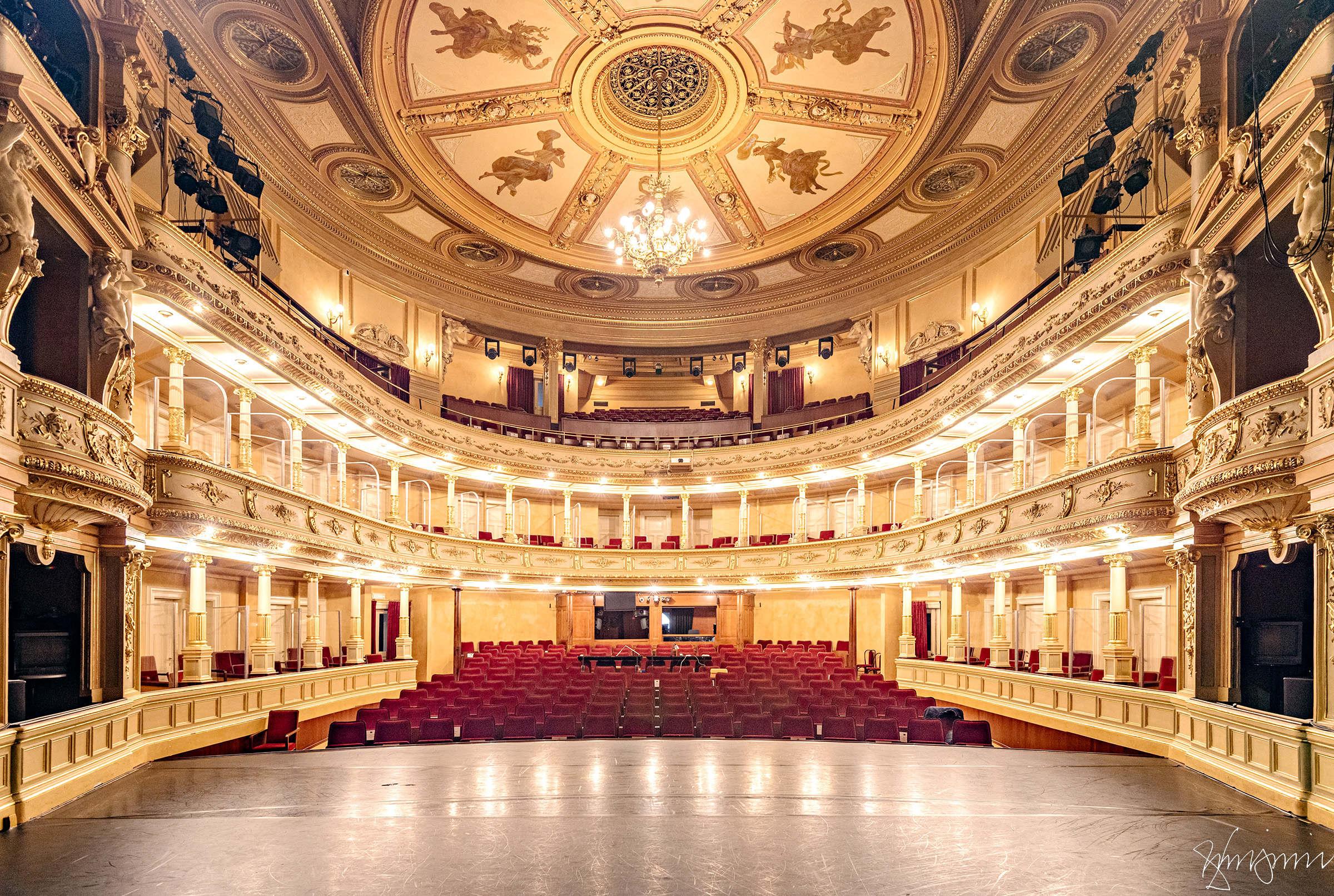 The building was built between 1890 and 1892 in the Neo-Renaissance style according to the plans of Czech architects Jan Vladimir Hrasky and Anton Hruby. The hall is horseshoe-shaped and surrounded by arched corridors leading to the staircases. In addition to the stalls, there are ground floor and floor loge boxes on the perimeter of the hall, followed by a balcony and a gallery, and behind there are stands.

The large National and University Library (NUK) reading room, a masterpiece by Jože Plečnik, is an architecturally and design-wise extremely sophisticated space. The space opens through four floors, illuminated through walls on the east and west sides, surrounded by bookcases. Here stand Plečnik’s typical chairs and lights and tables, and on the ceiling are large chandeliers. 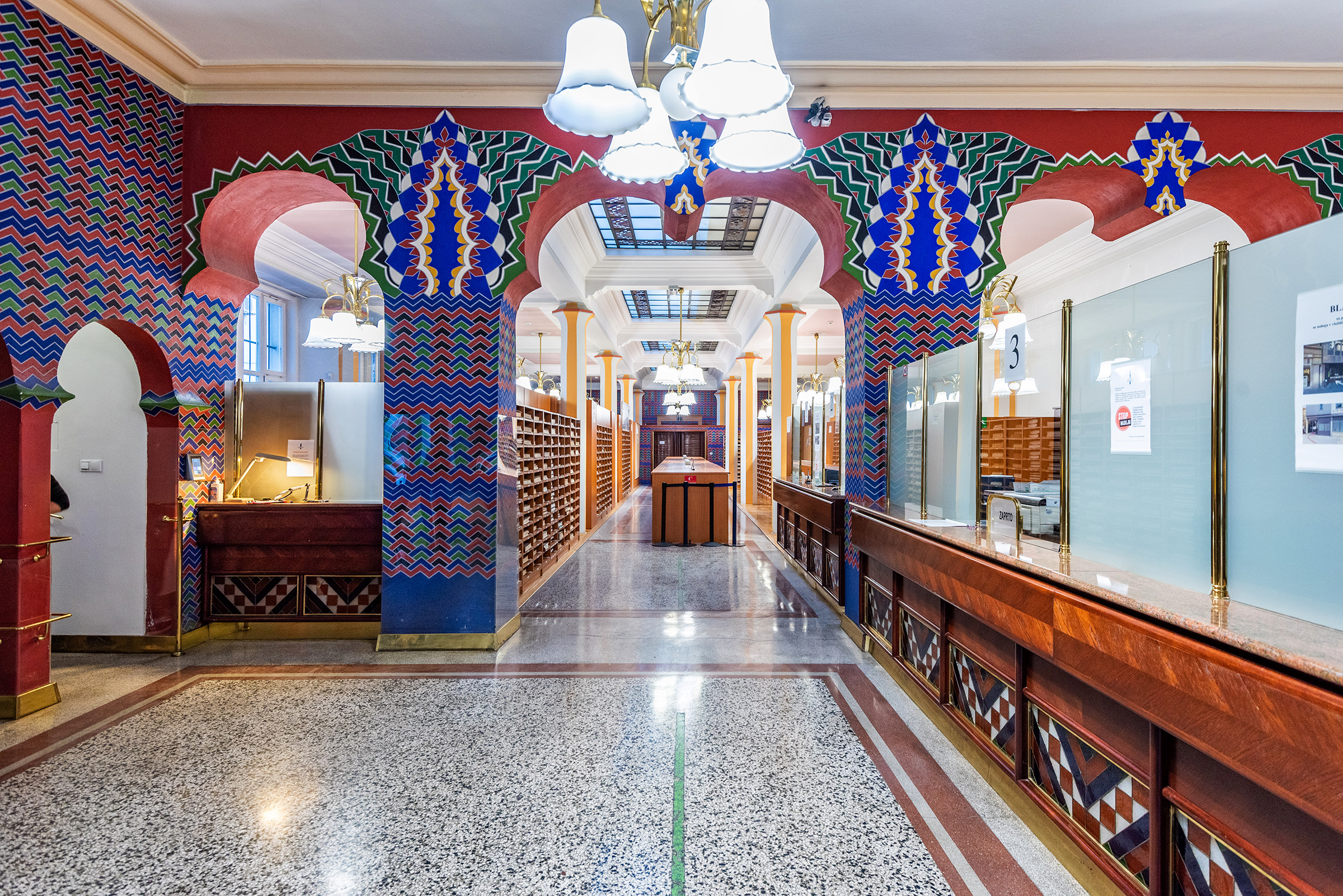 For many, the most beautiful house in Ljubljana with a characteristic picturesque Art Nouveau exterior, built in 1921, also has an extremely beautiful interior, made in the same style. The banking hall (the building once housed the Cooperative Business Bank) is painted with geometric ornaments and is complemented by motifs from Slovenian iconography. 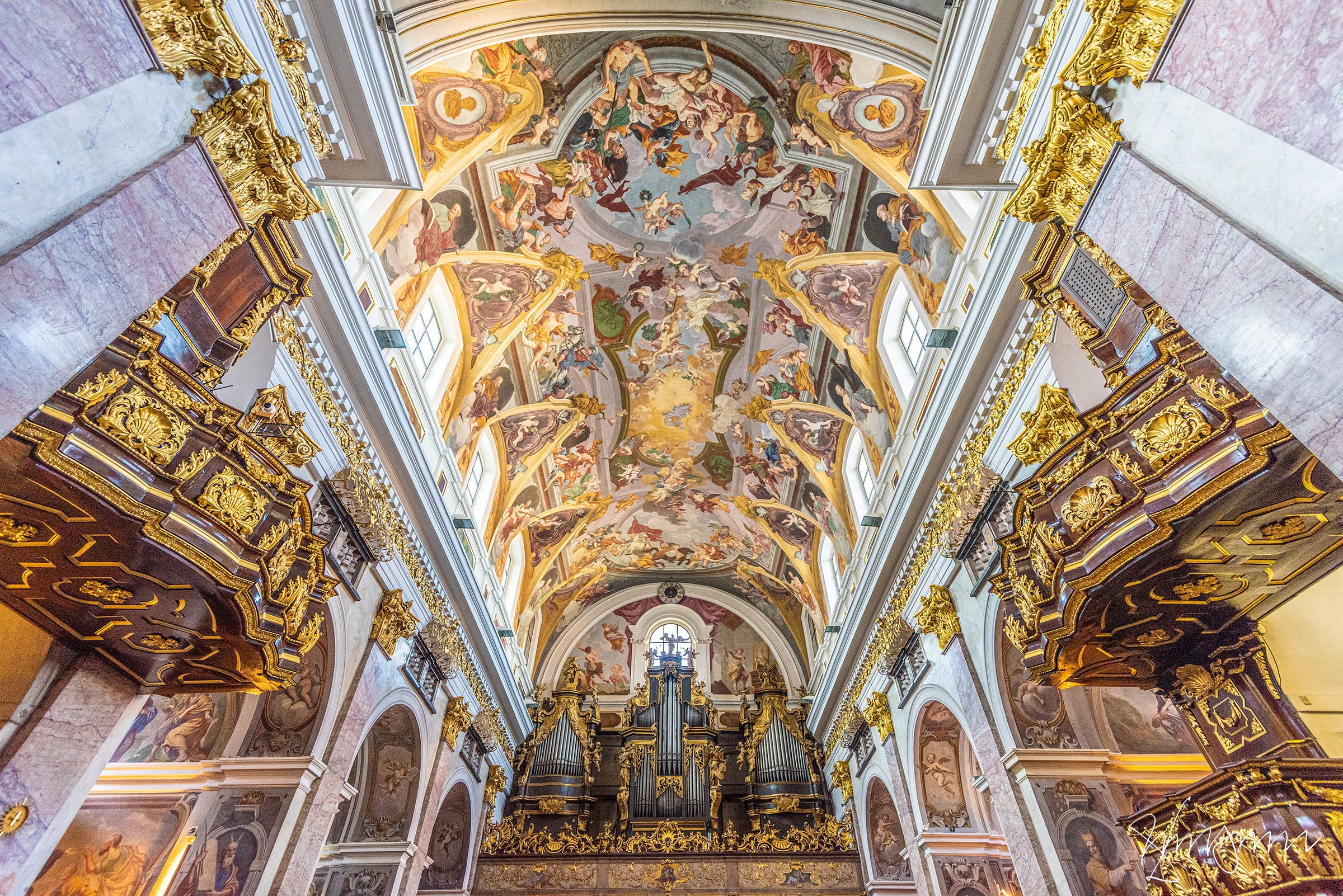 Ljubljana Cathedral, officially named Saint Nicholas’s Church, was built between 1701 and 1706. The interior is a real Baroque luxury. It was painted by Giulio Quaglio, depicting the miracles of St. Nicholas on the side walls of the presbytery, and the ceiling painting represents the story of the founding of the Ljubljana diocese. The Ljubljana Cathedral also houses works of art by other important artists, such as Francesco Robbe, Giuseppe Groppelli, Angel Putti, Matevž Langus, Jože Plečnik, Tone Demšar, Mirsad Begić, Ivan Vurnik and Stane Kregar. 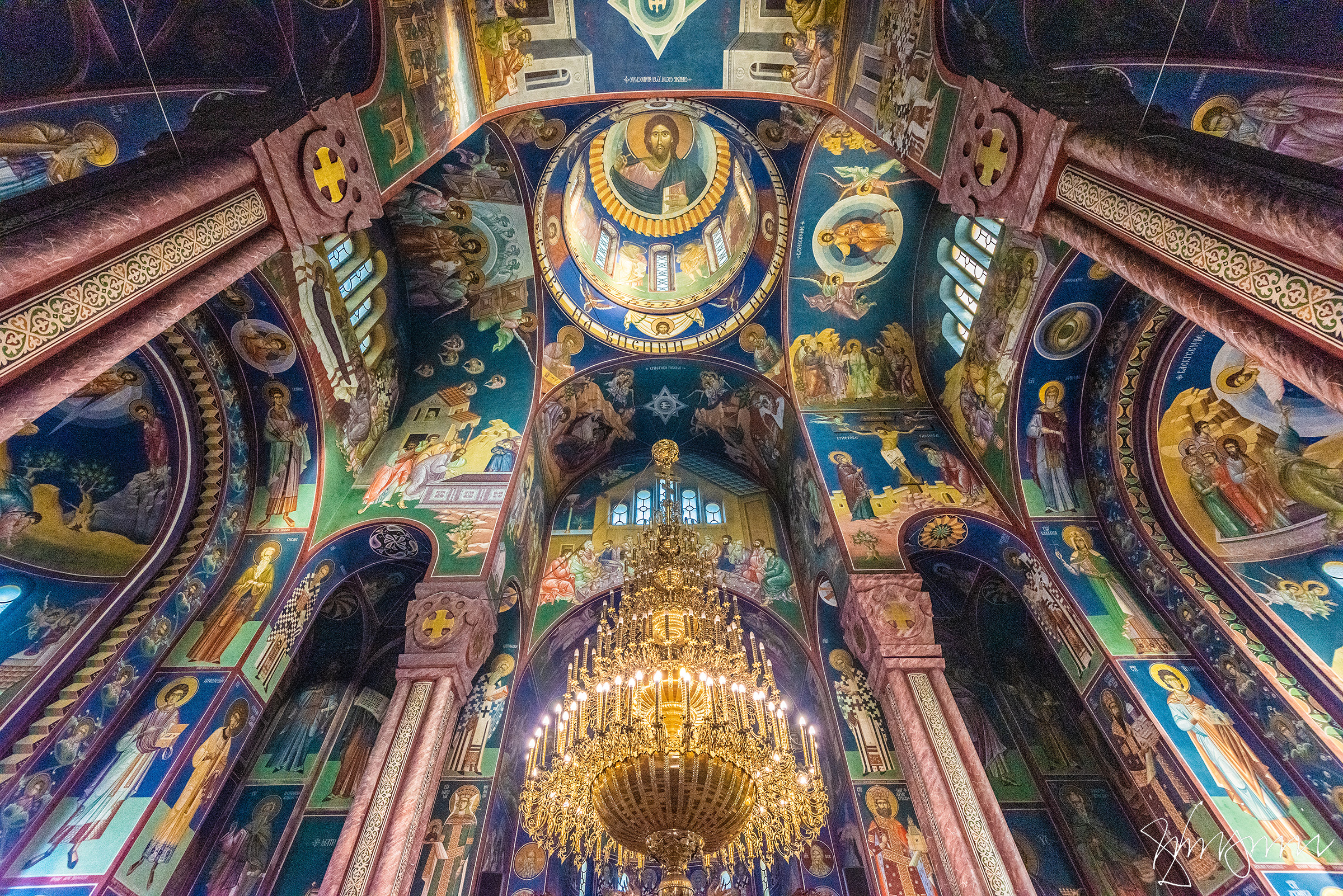 Sts. Cyril and Methodius Church in Ljubljana, commonly known as the Orthodox Church, attracts with its colourful interior and distinctive iconography. Construction began in 1932. The plan was made by the Belgrade architect Momir Korunović, who took the medieval Serbian five-domed church based on a Greek cross as the basis of the church in Ljubljana. The icons in the church are the work of the Slovenian painter Mirko Šubic. The frescoes inside the church were designed between 1986 and 1997 by Serbian sculptors and painters Dragomir Jašović, Mišo Mladenović and Danica Mladenović.

Today’s presidential palace was built after the earthquake of 1895 according to the plans of architect Emil von Förster and engineer Rudolf Bauer. It is a Neo-Renaissance building with a strict exterior and a varied, open interior. The most beautiful rooms are on the first floor, where the central staircase leads. The vault of the grand staircase is carried by mighty atlantes, made by the Austrian sculptor Theodor Friedl. The staircase is decorated with brass candelabras by Leopold Tratnik and the famous statue of a stallion, as depicted by Janez Boljka. At the top of the stairs, we enter the Great or Crystal Hall. 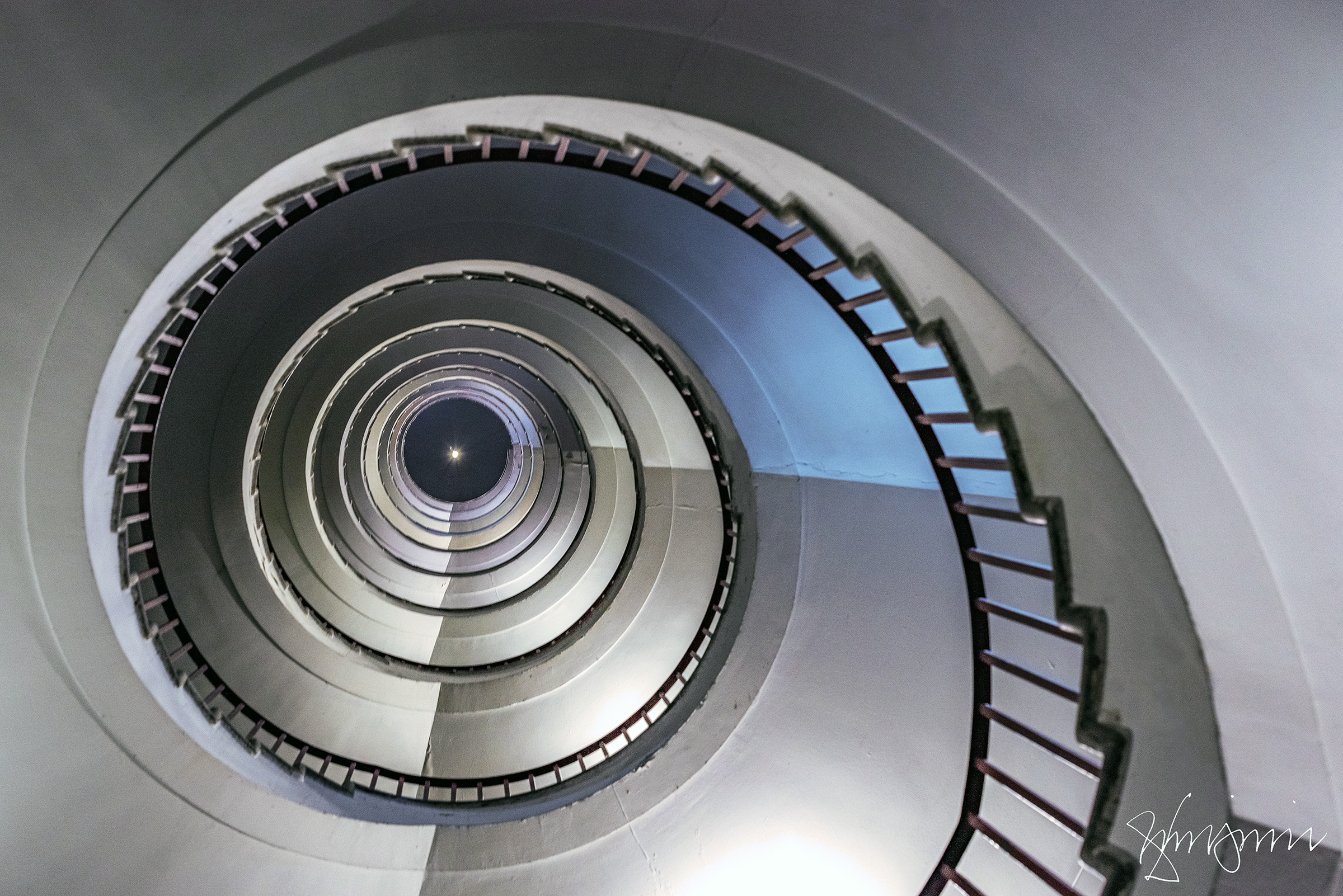 The Ljubljana skyscraper was built in 1933 and designed by the architect Vladimir Šubic. At the time of its opening, it was the tallest building in Central Europe and, until World War II, the tallest building in the then political territory of the Balkans. Its interior is famous for its extraordinary precision, especially attractive is the circular staircase in the centre of the building. 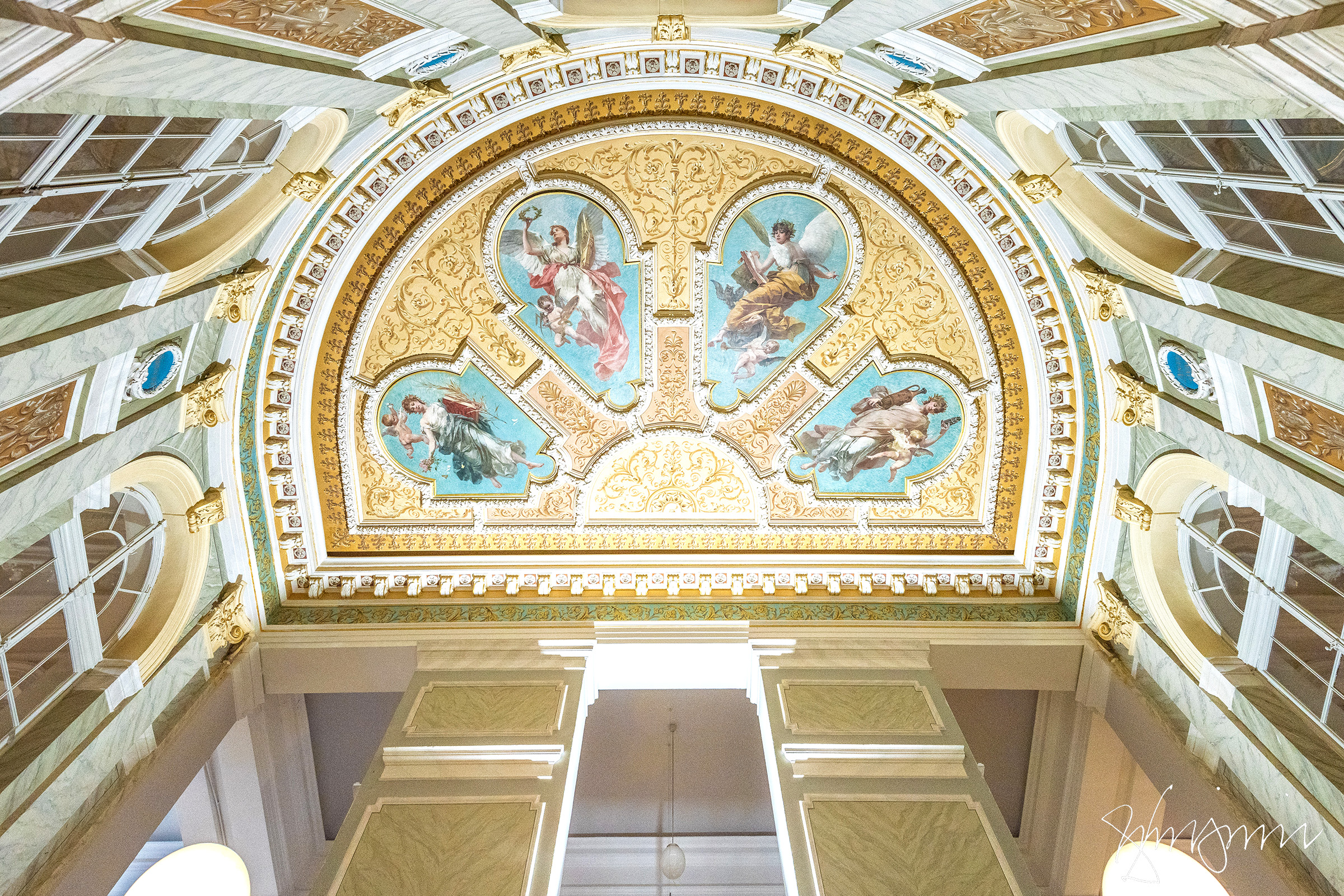 Rudolfinum is a palace in Ljubljana, which houses the National Museum of Slovenia and the National Museum of Slovenia. The building was built in 1888 in the Neo-Renaissance style, according to the plans of the Slovenian architect Viljem Tre. The ceiling paintings in the museum are the work of Janez Šubic and Jurij Šubic. On the railing of the staircase leading to the first floor are statues of eight muses, and the four figures on the ceiling painting above the staircase represent parables for archaeology, art, history and science. 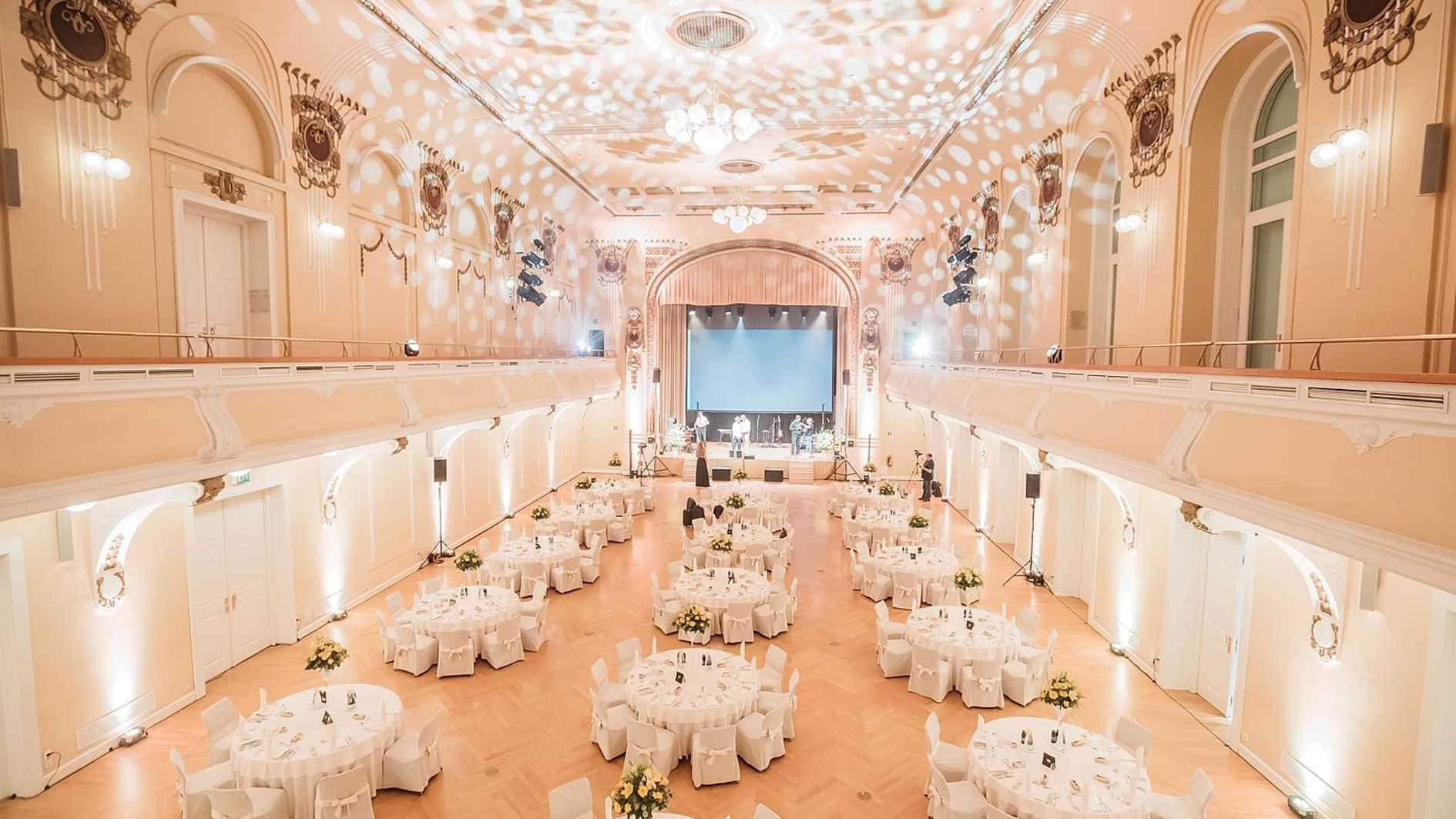 Grand Hotel Union is the largest congress hotel in Ljubljana. It was built in 1905 in the Art Nouveau style. Its main pride is the beautiful main hall, where various meetings, cultural events and gala dinners take place. 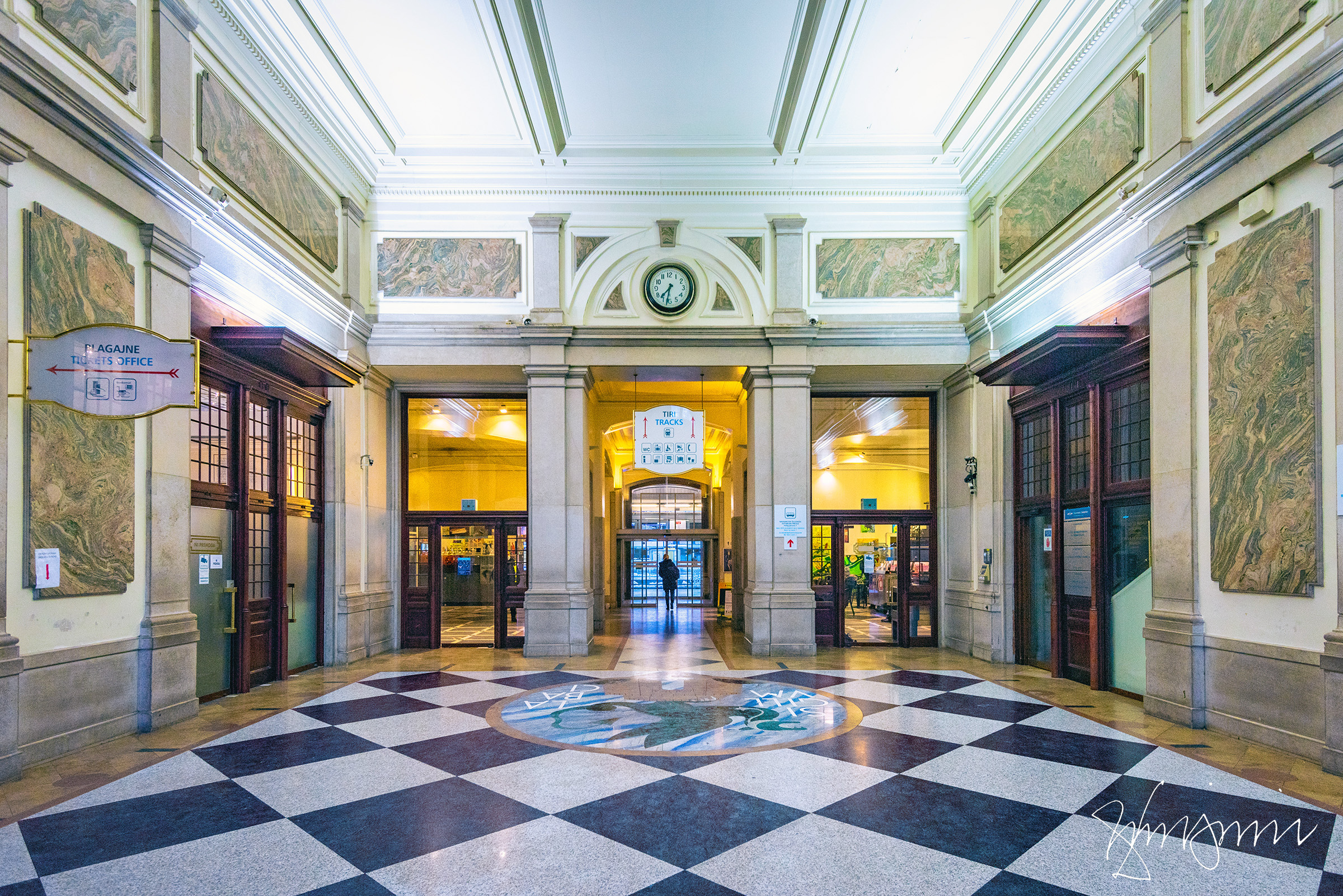 Ljubljana Railway Station is the most important railway crossroads in the country. It was built in 1849 as the first railway station in the city, according to the standard plan for the Austrian Southern Railway.