Before we started relying on watches and then on cell phones showing the time we relied on watches in public buildings. They were everywhere, especially in major buildings: churches, schools, courts, bus stops, universities … In fact, the use of the past tense is out of place because all those clocks are still in the same places they used to be, still counting down seconds, minutes and hours, reminding us of time that lies over us and sometimes is a sequence of events which we shall not miss. The clocks still play important roles in the urban space: they give buildings character, arouse people’s interest and make buildings attractive. Advice to investors who build buildings: if you want people to recognize a building as important, keep a clock on it. If you want people to have dates in front of your building, put a clock on it. If you want the building to appear on social media, have a clock on it.

A walk between Ljubljana town clocks is above all a walk through time – from baroque to socialism and modern times. These clocks are very different, each has its own story, each has its own meaning in the urban space, and each is an icon that people like to look at. 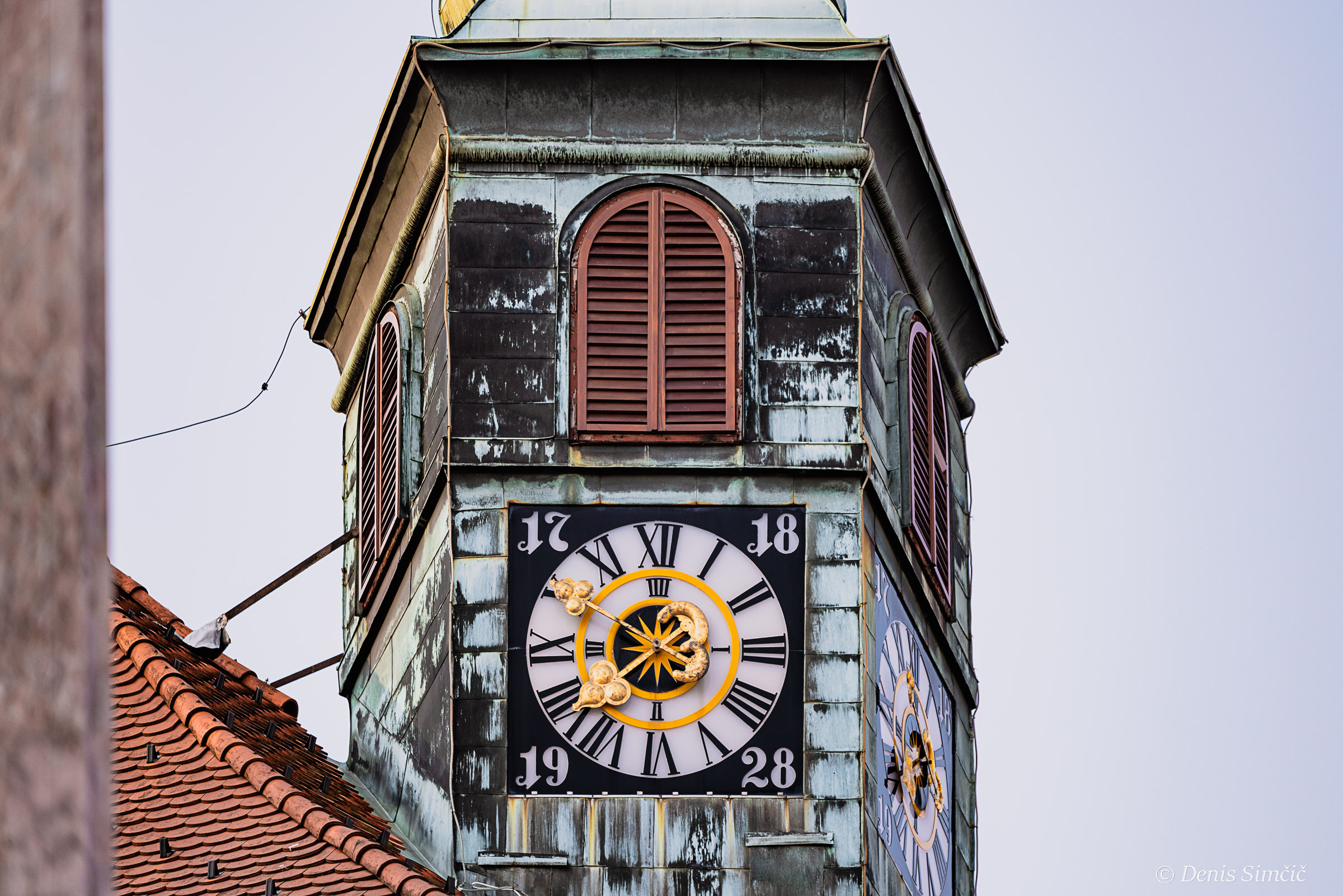 The clock in the pentagonal tower at the top of  Ljubljana’s Town Hall has been ticking almost uninterruptedly for three centuries. In terms of construction and mechanical operation, it is similar to the astronomical clock at the Prague City Hall. 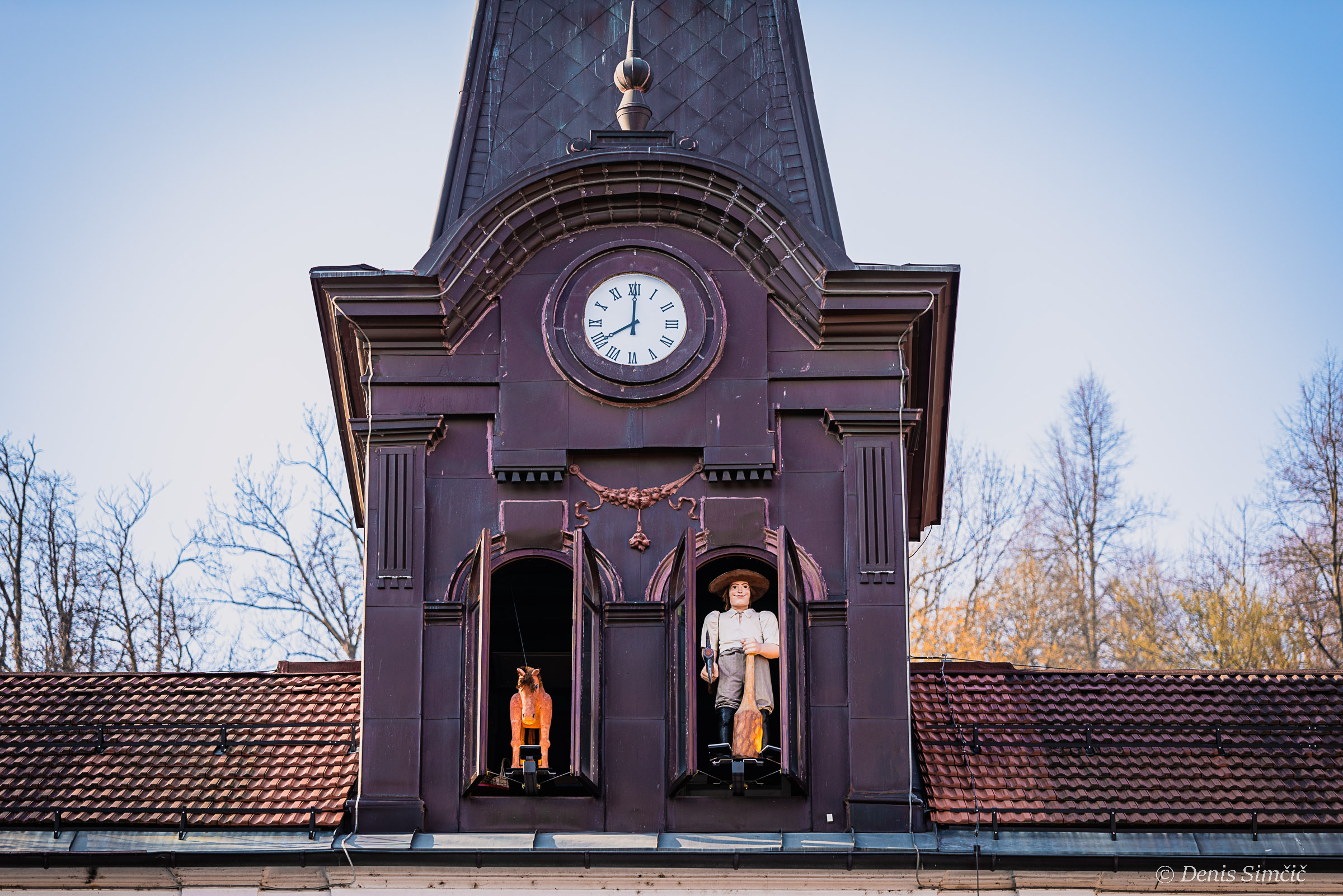 Every hour the famous Slovenian book character Martin Krpan and his Kobilica mare greet us at the top of the theatre along with the Milko Lazar music. 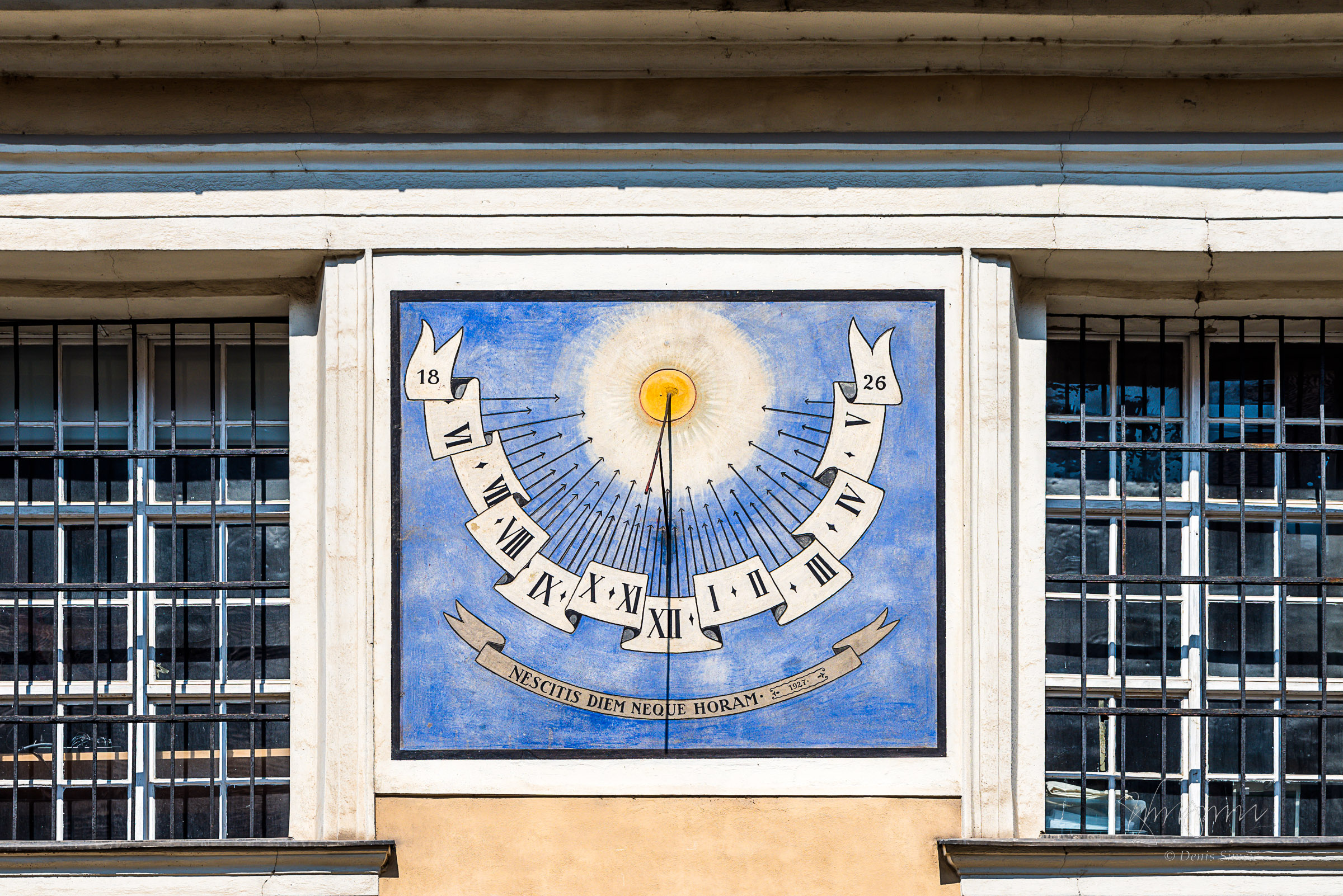 The sundial, located on the south wall of the Cathedral, bears the year 1826. Beneath the Roman dial is a Latin inscription: NESCITIS DIEM NEQUE HORAM – You know neither the day nor the hour. 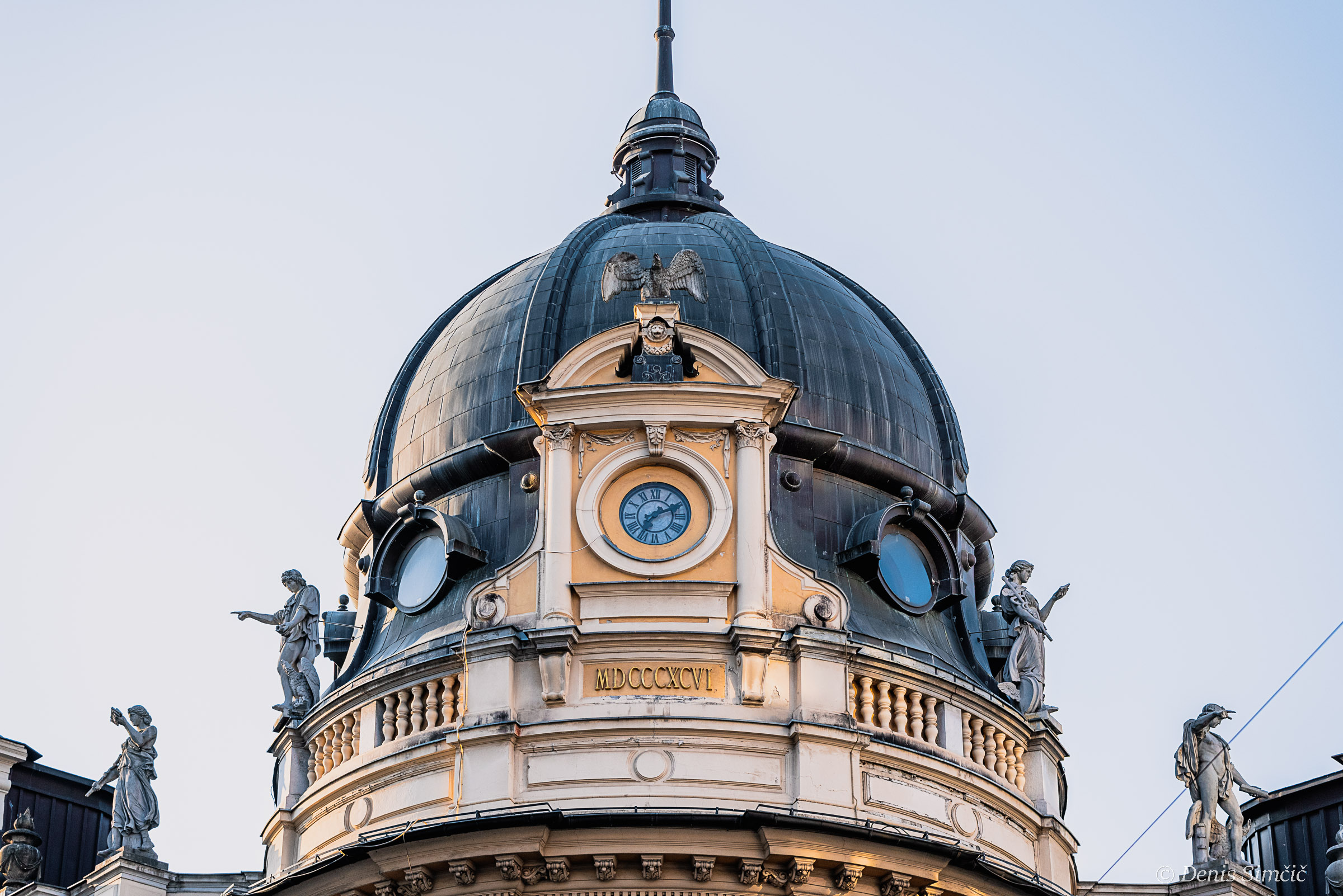 The building has statues of a post office, telegraph, railway and navigation arranged on a geison around the dome, and above the clock with Roman numerals is a stone eagle with outstretched wings.

The Franciscan Church of the Annunciation 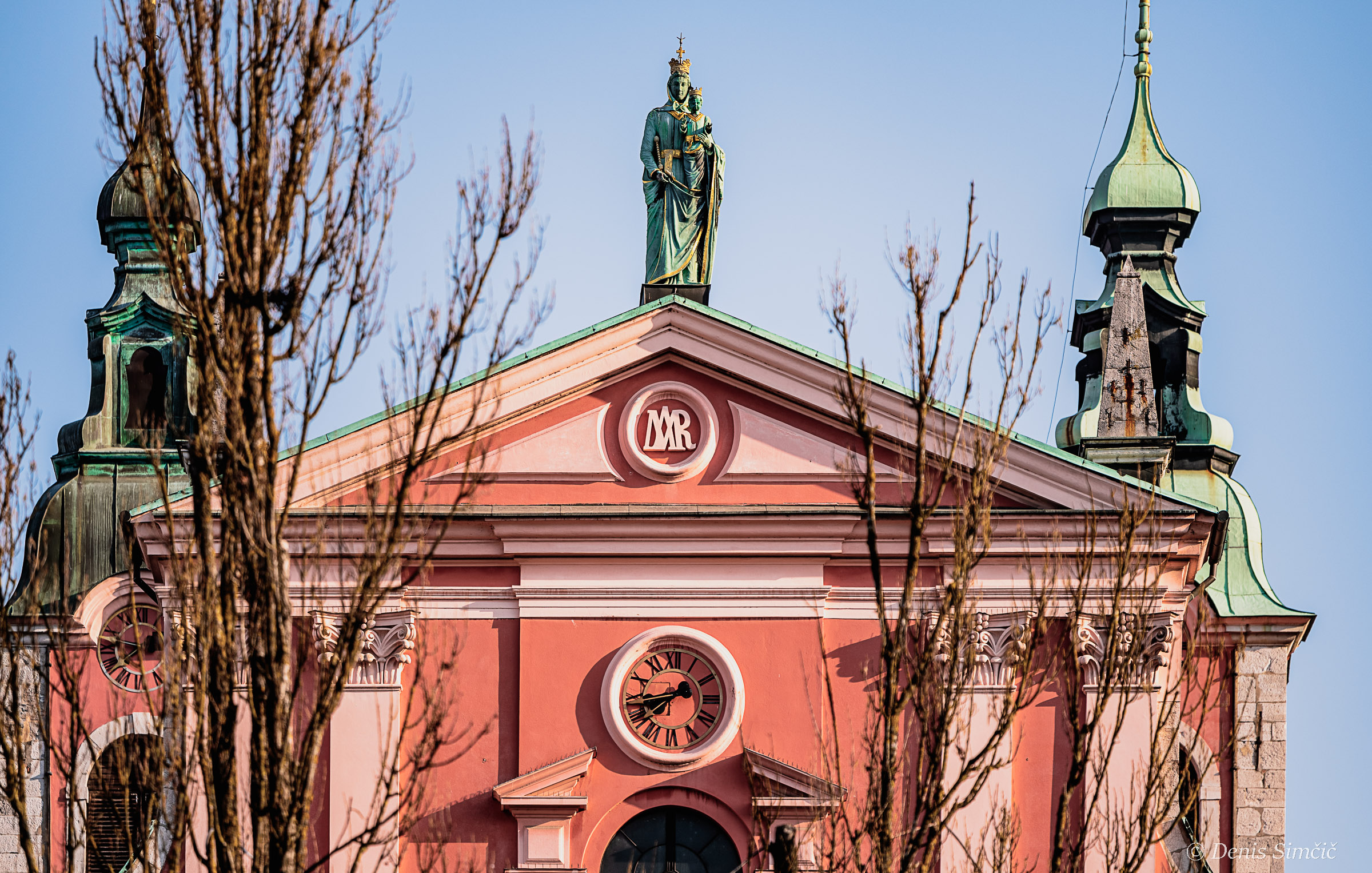 The clock in the Franciscan church is not only on the bell tower but also on the facade. It is skillfully integrated into decorative elements and elegant colour combinations. 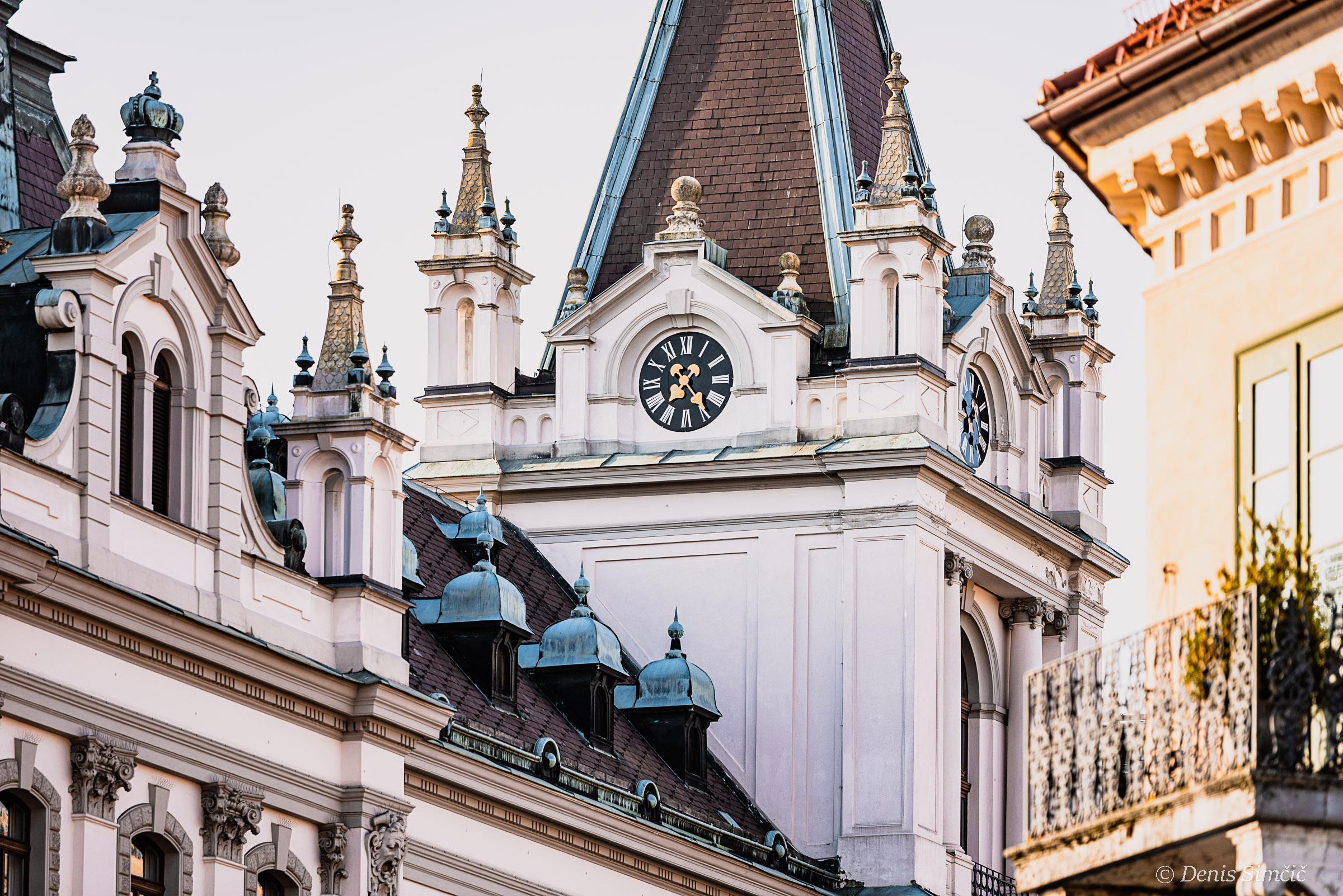 The Renaissance Palace, which houses the Rectorship Office of the University of Ljubljana, has played an important role in Slovenian history, and the clock is not located on the front of the building, but on a side tower facing Vegova Street. 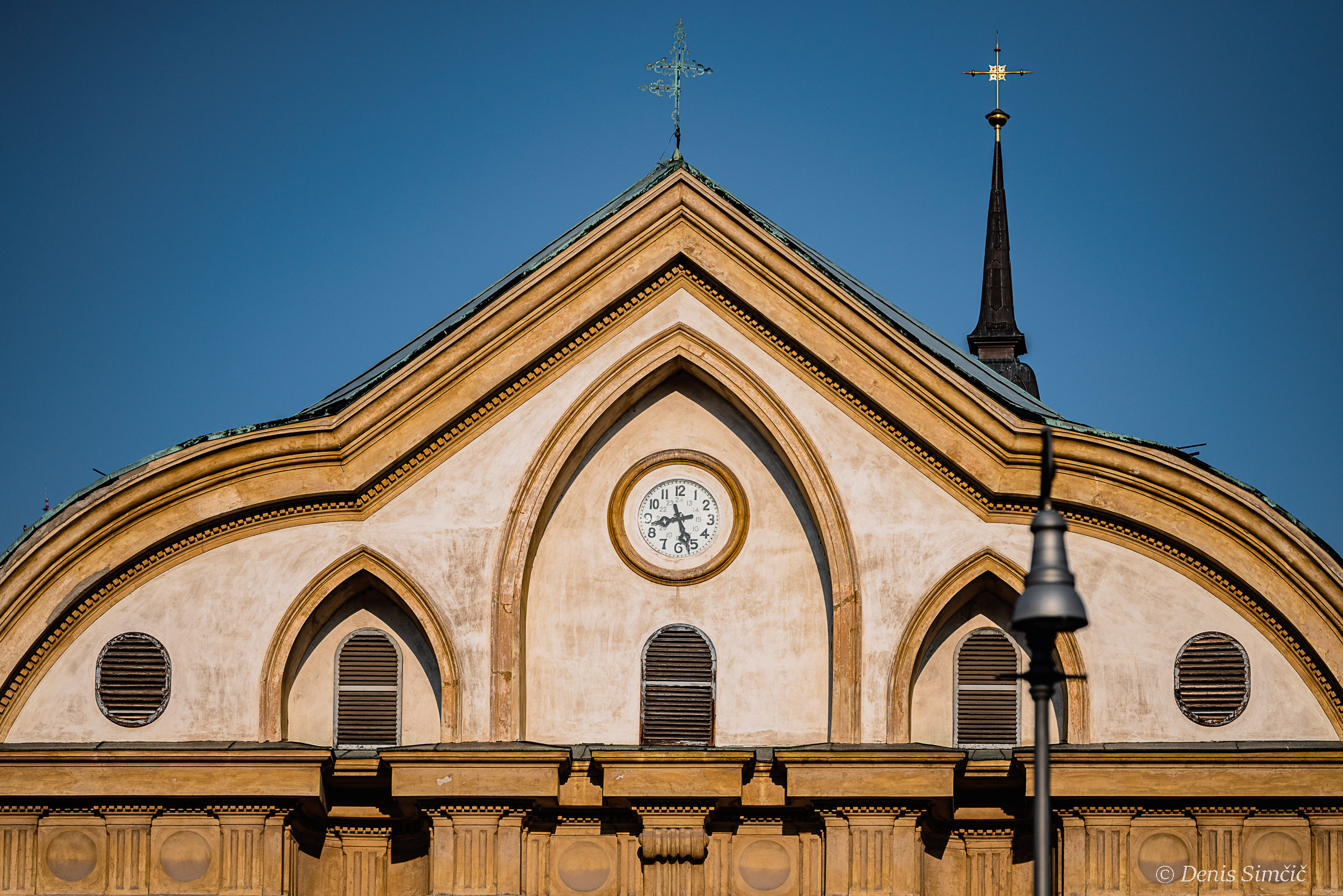 In the beautiful composition of windows and arches on the facade of the church, there is also a clock that has been clicking since 1890. 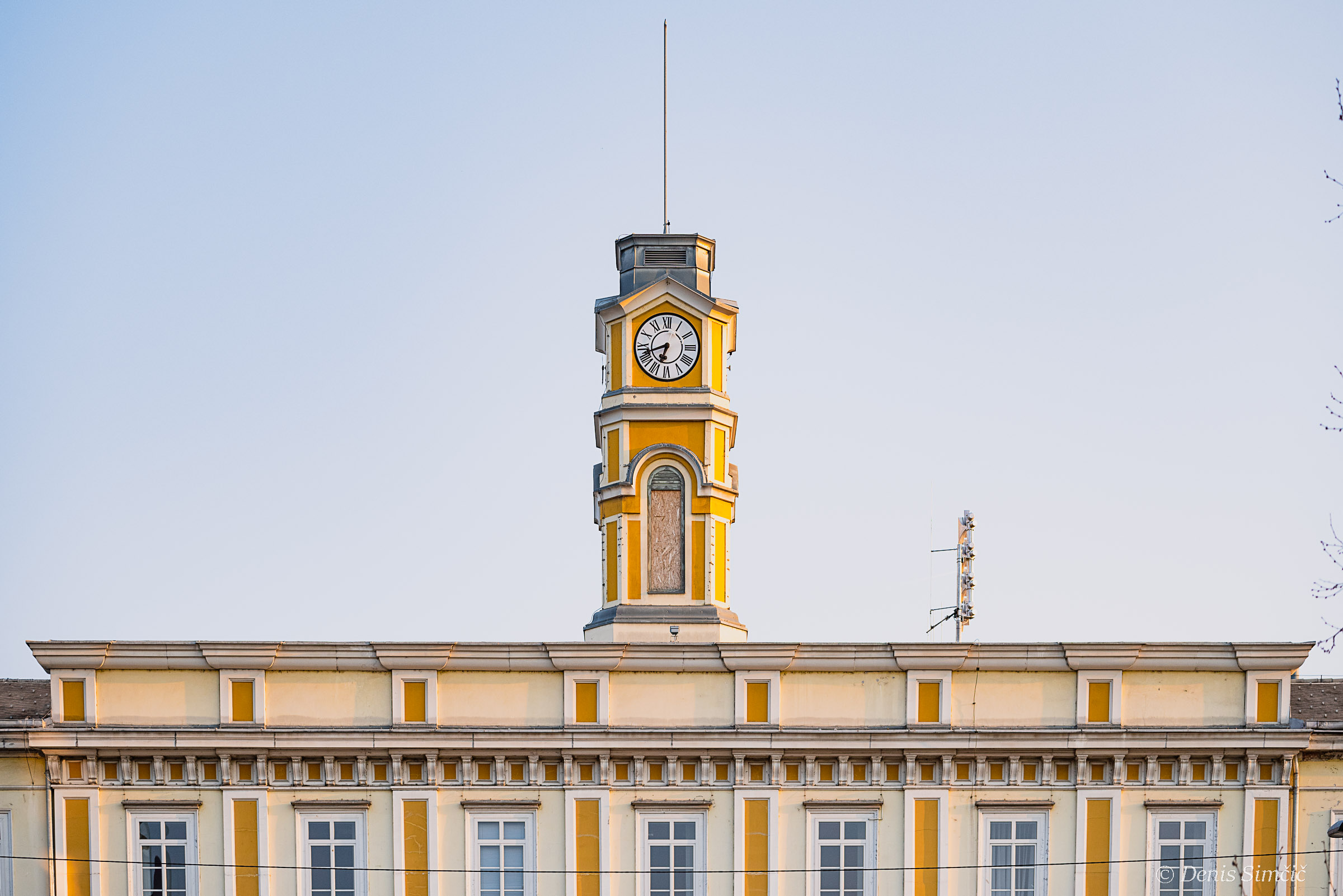 The Ljubljana railway station was built according to the standard plan for the Austrian Southern Railway, which  also remind the clock tower. 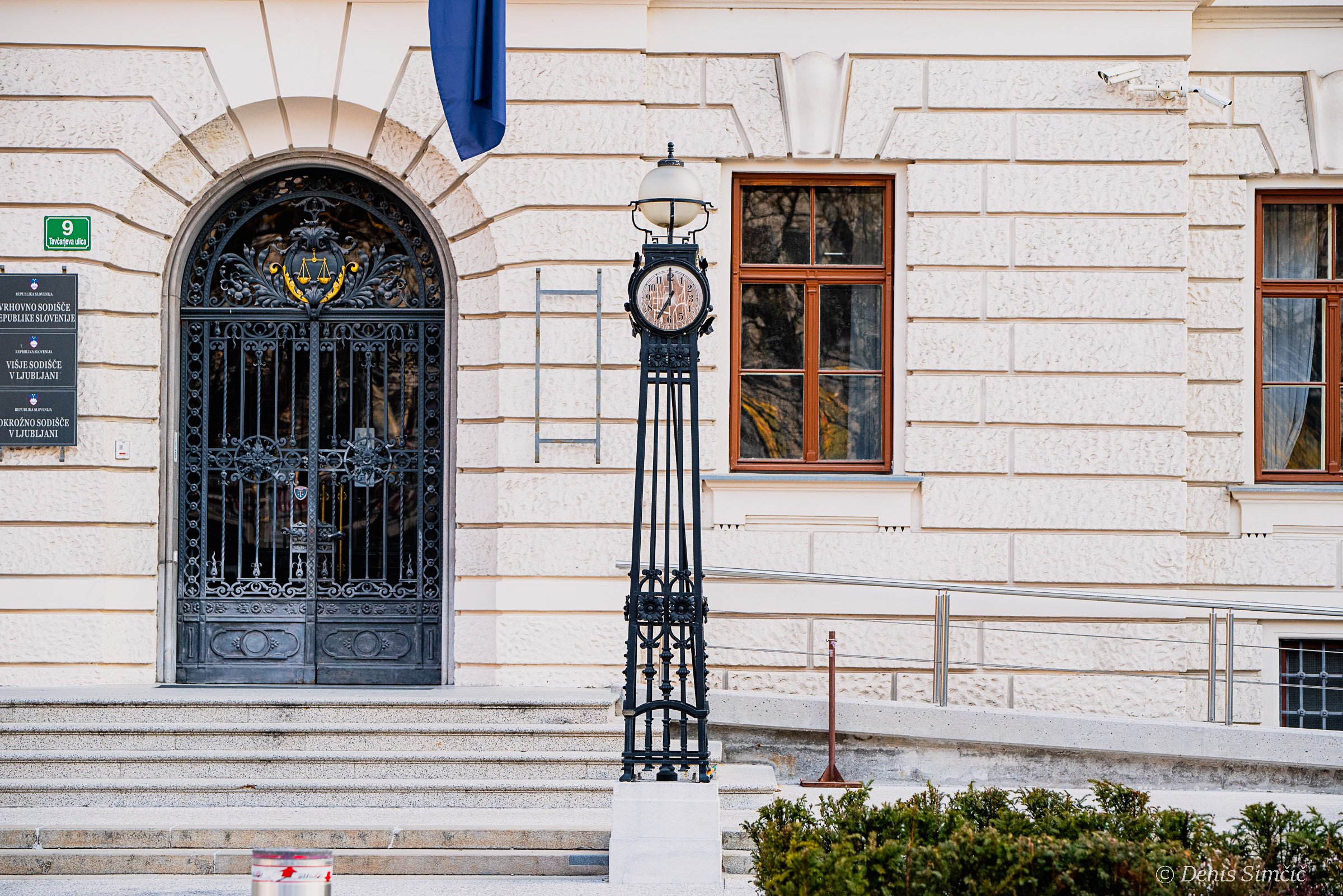 There are two clocks in front of the entrance to the courthouse, which form a kind of entrance portal. They have been helping entrants for more than a century not to miss court hearings. 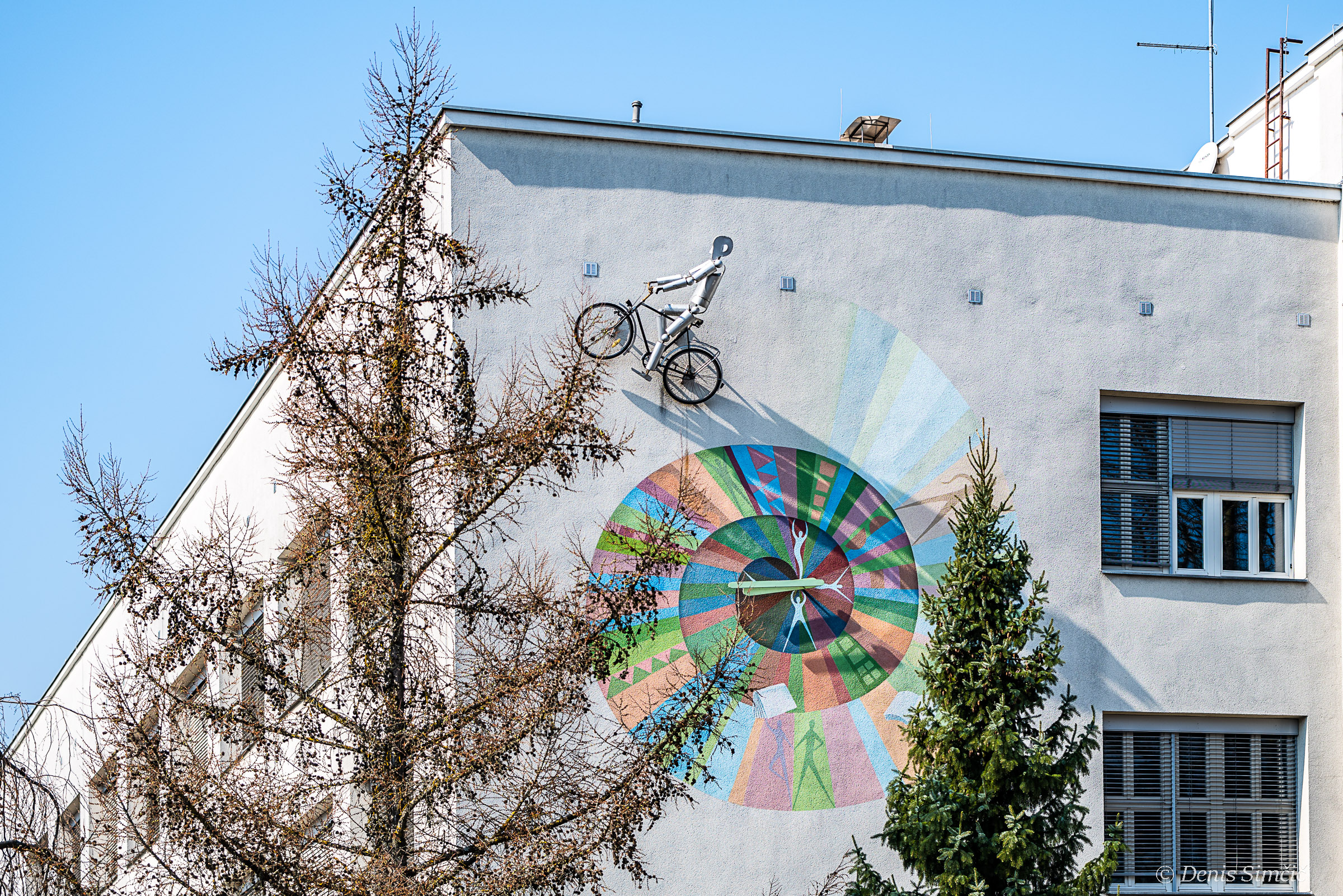 On the side facade of the building is painted a time spiral in which there is a clock. The cyclist symbolizes the learning and path of the students. At the beginning of the spiral, a closed book is depicted, which opens towards the end of the spiral. The painting with the cyclist’s sculpture was designed in 1996 by Mojca Leben and Davor Grgičevič.

Iskra’s digital clock on the TR3 tower is an important landmark and identification point in the city, as it can be seen from afar. It also shows the date and temperature. When the display did not work for some time due to obsolescence and it seemed that it would go out forever, the people of Ljubljana demanded that it should be repaired. 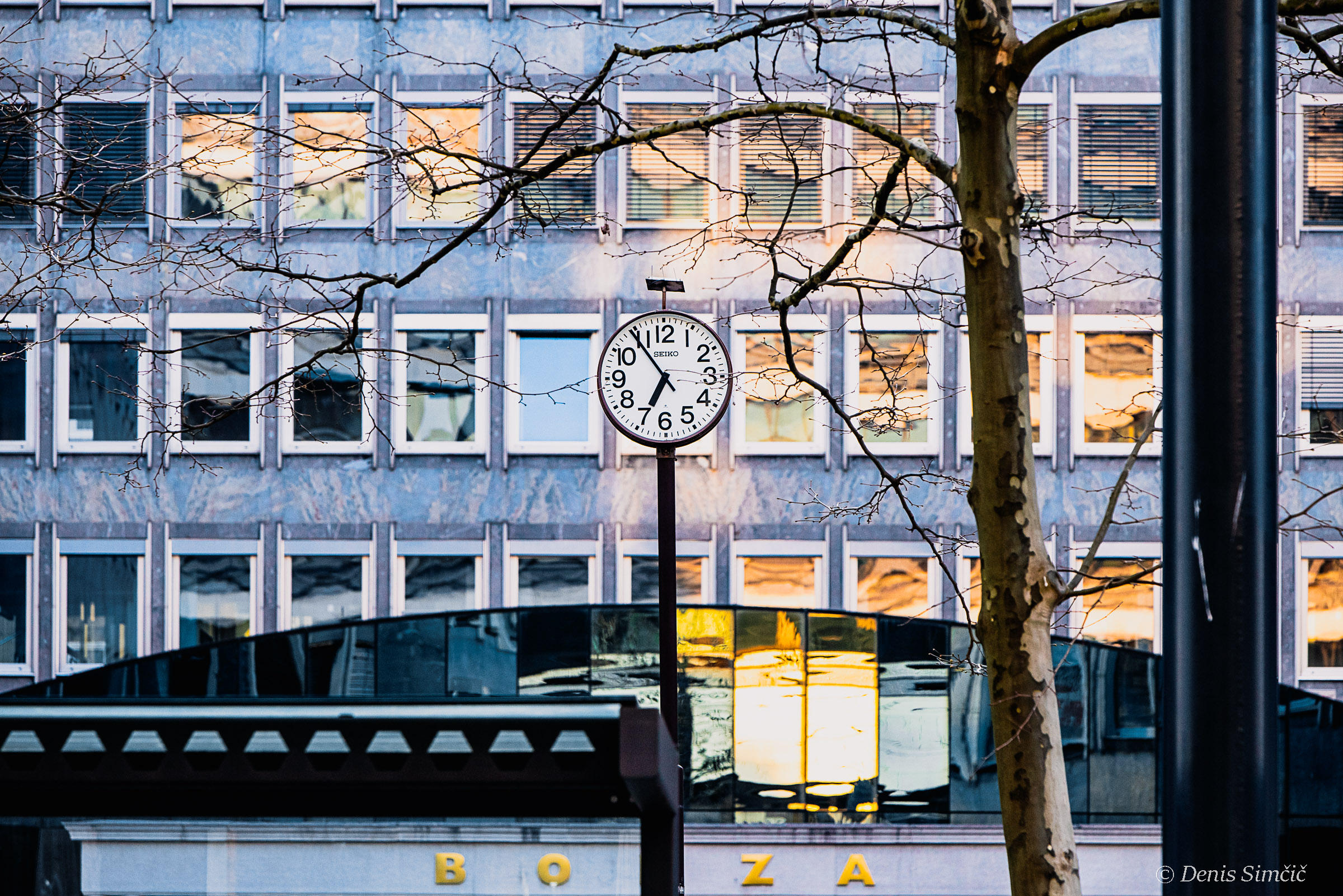 Bavarski dvor is the main hub of public transport in Ljubljana. For such a bus stop, it is right to have a clock. It is not large, but with a clear and strict image it significantly marks Bavarski dvor bus stop. 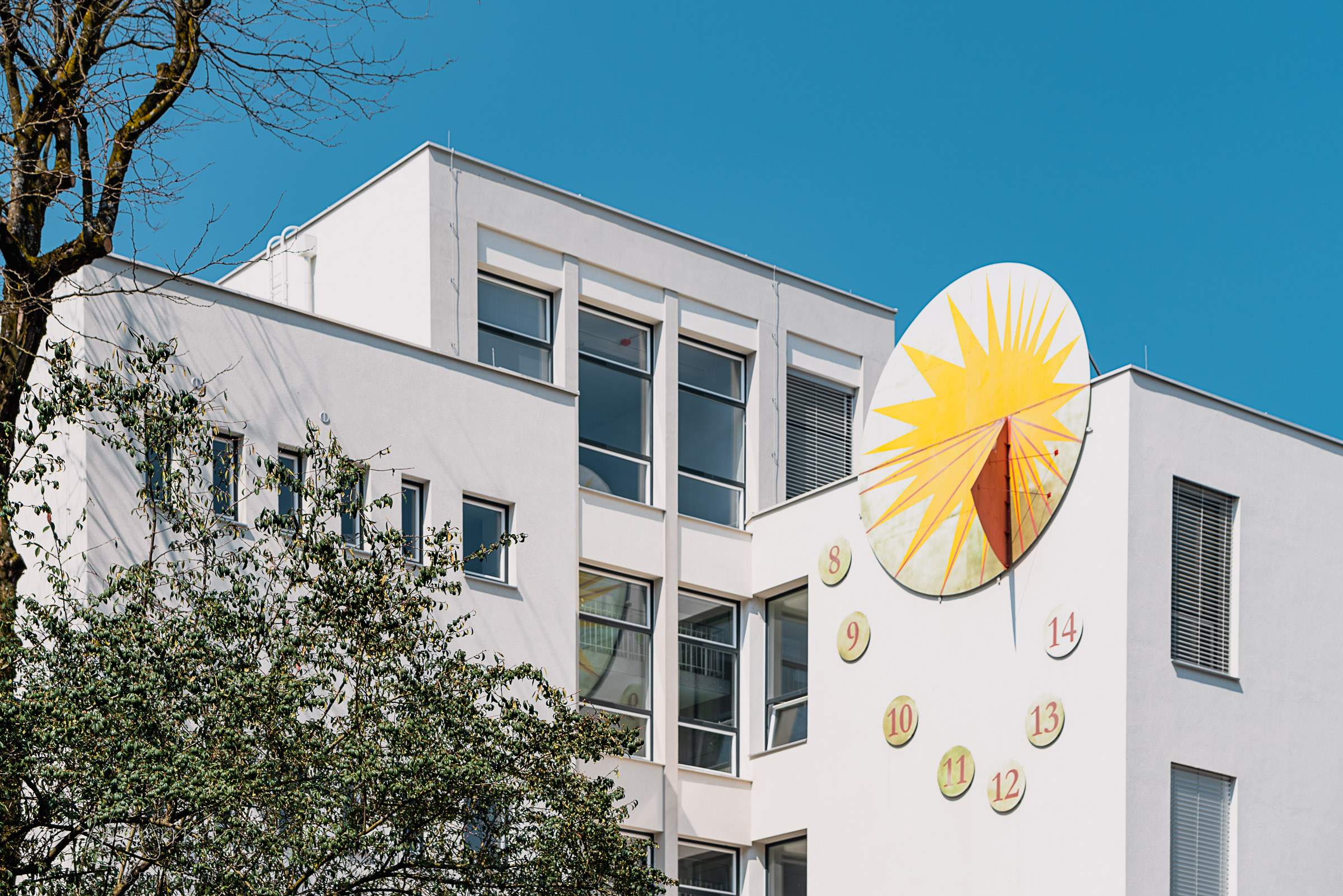 The clock in the Vodmat Primary School gives the building visibility, but it certainly also has an educational purpose, as students can learn about the sundial. 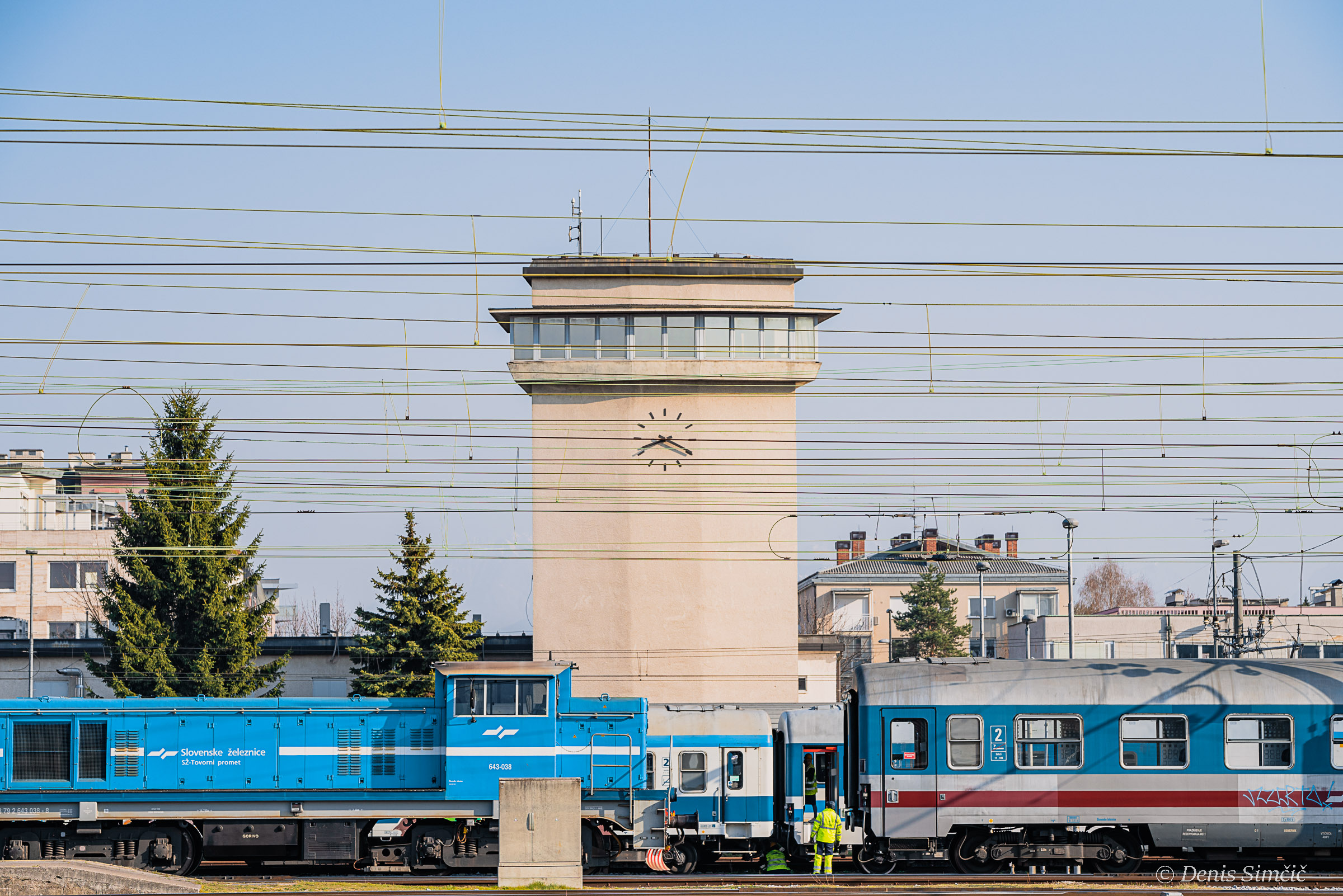 The clock on the control tower of the railway station determines the departures and arrivals of trains. Its pure and minimalist image reflects the importance of accurate time in rail transport and nicely complements the functionalist architecture of the control tower.